How much are speeding fines in the UK?

Did you know that nearly 2.7 million motorists in England and Wales have at least three penalty points on their driving licenses, the majority of which come from speeding offences? However, in an interesting article in Motor1.com, part of the reason for such a high number of motorists being caught speeding can be put down to a combination of fast roads and speed cameras. 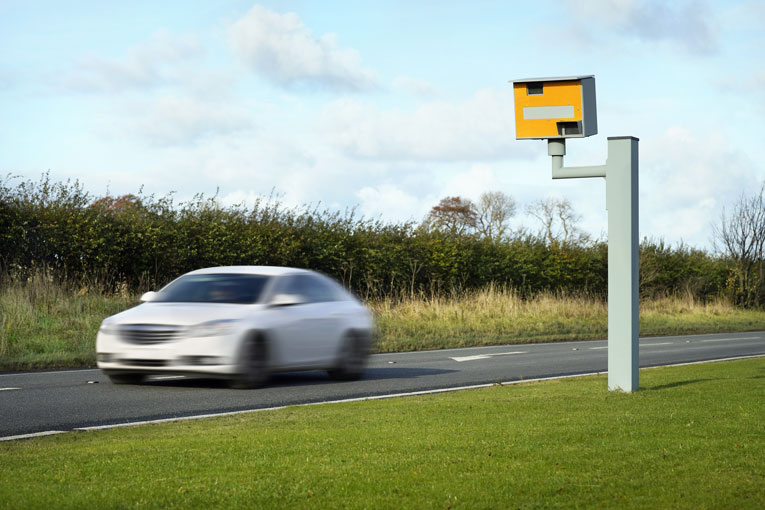 In other words, the speeding is not intentional or deliberate, but more a consequence. However, that does not take away from the fact that irrespective of whether your speeding is as a result of being caught knowingly or accidentally breaking the speed limit, you are going to be fined, as well as have your driving licence endorsed with upwards of three penalty points.

Where fixed penalty notices for speeding are concerned, there are upper limits beyond which, if the speed you were travelling at exceeds this, the severity of the offence is deemed one that is worthy of a court appearance.

There is a ‘grey area’ between the two where the outcome is likely dependent on the police officer responsible for your case. They will make what is likely referred to a ‘judgement call’ as, aside from the actual speed you were travelling at, they will also look at the level of danger that resulted from your speeding.

An example of this would be speeding at 45mph along a straight road with clear visibility and no other traffic around, on a section of road where the speed limit has been set at 30 mph. This may be seen merely as speeding and incur a fixed penalty notice.

However, speeding along a road at 45 mph where the speed limit has been set at 30 mph and where there is a good amount of traffic, and you have been aggressively overtaking cars which are sticking to the speed limit may be seen as driving more dangerously, meaning you are more likely to be given a summons rather than a fixed penalty notice.

While a fixed penalty notice would mean your driving licence was endorsed with three penalty points, a court appearance means you could receive an endorsement of either three or six penalty points depending on how dangerously it was perceived that you were driving.

Below, Table 1 shows the likely outcomes of breaking the speed limit: 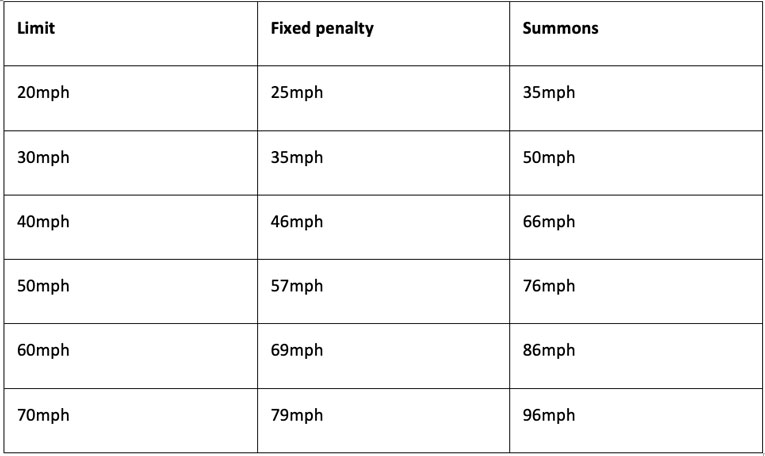 If you plead guilty when issued with a fixed penalty notice, you will have to pay a fine of £100.00 as well as having three penalty points added to your licence, but if you choose to contest the fixed penalty notice, you risk having up to six penalty points added to your licence and having to pay a much bigger fine if found guilty in court.

Where court fines are concerned, there is no fixed amount.

The fine will be calculated based on several individual factors and if the offence is deemed to be sufficiently high, a custodial sentence, as well as a fine and loss of licence for a fixed period could result.

To calculate the level of fine, first, the seriousness of the speeding offence is established and allocated to one of three band categories.

After that, the fine is calculated based on a percentage of earnings and the band category of the offence.

Table 2a below is used as a guide to establishing the level of severity of a speeding offence:

Table 2b is used as a guide to calculating the level of fine for each category of speeding offence:

It should be noted that the fines levied are subject to a maximum penalty of £1,000, or £2,500 if the speeding was on a motorway.

For first-time offenders, instead of a fine, there is also the possibility of taking a speed awareness course, which will require you taking a day off work. You will also be responsible for paying for the cost of the course, which is usually between £80.00 and £120.00. Taking the course can also lead to the avoidance of having penalty points added to your license.

Of course, the financial penalty for being caught speeding can extend well beyond the actual issuing of a fine. Here we are talking about your car insurance. While you are not legally obliged to report any penalty points or fine to your insurance company at the time, there is every likelihood that you will have to when it comes to renewing your insurance policy. Unfortunately, insurance companies do not look favourably on drivers who break the speed limit as they consider them to be a greater risk where accidents are concerned.

According to market research company Consumer Intelligence, motorway speeding convictions can see an increase in your insurance premium of an average £101.00.

If you’re caught speeding on a public road, this is likely to increase your insurance premium by around £36.00 a year.

The above figures were based on the analysis of 36,000 car insurance quotes obtained between April 2017 to April 2018.

Table 3 – Insurance premiums with and without speeding convictions

Of course, it would be straightforward to say that the best thing to do is stick to the speed limit and none of the above information need ever apply to you.

However, life is not like that, and, as previously mentioned, often, we can be caught speeding when it was not our intention.

Of course, there is always that situation where you are late for an important event, and the temptation to break the speed limit can be tough to resist. It may surprise you to learn that of all accidents on the road in 2019, only 3% were caused as a direct result of speeding.

Sadly, while that may seem a very low number, when put into the context of 157,630 people being injured on our roads in 2019 and 1,870 people killed, that 3% equates to 4,729 injuries and 56 deaths respectively, which is a very sobering thought.

Contact one of our motoring solicitors on all aspects of speeding, speeding fines and tickets; providing expert advice for a variety of driving offences.