As of January 31, 2020, Britain officially stopped being a part of the European Union (EU) and Brexit had finally become a reality. Brexit, the ‘affectionate’ term used for Britain exiting the EU, has resulted in a plethora of complications, many of which are still being dealt with as the UK parliament tries to negotiate with the EU what responsibilities remain and which will no longer be in existence.

Many of these responsibilities are financial as well as having a legal basis. 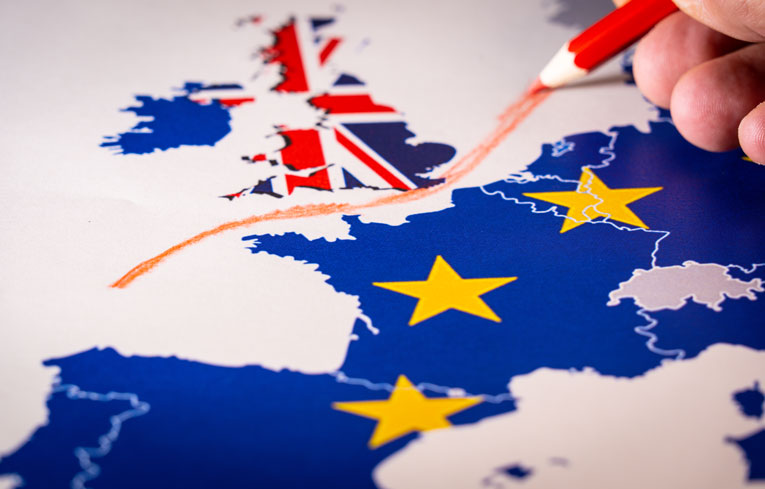 In simple terms, four principal areas will be significantly affected by Brexit where the UK is concerned – finance, travel/immigration/freedom of movement, trade, and sovereignty.

These four areas were also the principal points for consideration where the Brexit referendum was concerned.

In looking at how life in Britain will change after Brexit, it is also worth simultaneously looking at the reasons why there was an initial referendum to remain or leave the EU, held on June 16, 2016, as this will help to provide a clear insight into many of the changes that now exist in Britain as a result of Brexit.

Finance – Many Eurosceptics widely considered that the EU paid more to the EU than it ever received in return. As an example, in 2017, the UK contributed €13 billion to the EU budget (it was €18 billion but reduced thanks to a rebate). In return, the UK received approximately €4 billion in EU spending, leaving a deficit of €9 billion.

One of the UK’s biggest complaints was, that as one of the most significant contributors to the EU budget, the total amount equated to 18% of all contributions, or nearly one fifth, despite there being 28 member states in total. These financial contributions will now cease.

With the UK no longer being a member of the EU, the border between the UK and the rest of Europe was reinstated after Brexit, halting the free flow of not just migrants to the UK, but all EU nationals.

Conversely, while before Brexit, all UK citizens could travel freely between all member EU countries, this is no longer the case, and British citizens will require a passport to enter any other EU countries.

Immigration (the arrival of foreign nationals in Britain) turned out to be a vital issue of the 2016 referendum, though at the time this seemed to take the governing Conservative Party by surprise.

As an EU member state, the UK’s borders were open to all other European nationals, and this led to concerns about large numbers of EU migrants being attracted to Britain because of its generous benefits system. They were seen as a “drain on the system”, and a backdrop to the immigration ‘problem’ was the perception that foreign immigrants were also taking jobs from UK nationals.

In truth, on average, according to an Oxford Economics study, EU migrants to the UK generated a net contribution to the country’s economy. Put simply, they paid more in terms of taxes than they took in benefits, such as education, healthcare, etc., that net balance being a contribution of €2,300 per annum.

Furthermore, once the 2016 referendum saw the UK decide to leave Brexit, many European nationals who had come to the UK to work decided that with their ability to stay in the UK now threatened, they would return home. The decision to return home by Central Europeans – those from Poland, Romania, Bulgaria, etc., – was facilitated by the fact that economies in their own countries had significantly improved over the years since they first came to the UK.

So, if foreign migrants were taking jobs from UK workers, then you would imagine that there would be no problem in the jobs they did now being done by UK nationals, right?

Wrong. A classic example of this relates to the between 60,000 and 70,000 seasonal workers employed in the UK who are responsible for picking and packing much of our agricultural produce, predominantly fruit and vegetables. 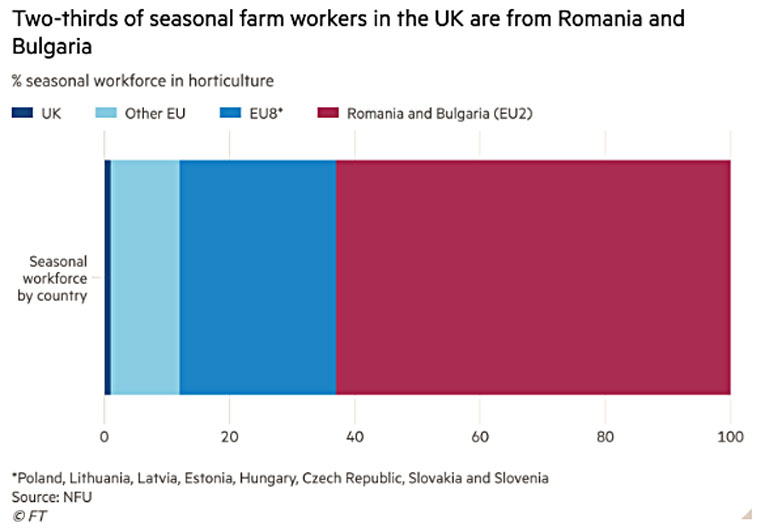 In the Financial Times, dated August 2019, the paper wrote the following concerning the problems relating to finding seasonal workers:

“Last year, 56 per cent of growers surveyed by the NFU reported not being able to secure all the seasonal workers they needed, compared with 59 per cent in 2017. In contrast, the figure stood at 25 per cent before the referendum. Last year, 44 per cent of farmers also reported crops going unharvested as a result of labour shortages, a significant increase from the 30 per cent in 2017.”

In July 2020, the situation concerning another area affected by the reduction of EU nationals coming to Britain to work grew worse. The healthcare sector, or social care, relies heavily upon foreign nationals, especially in residential care homes.

However, according to the Cavendish Coalition: “One in six workers in the sector is a foreign national and earn on average between £16,400 and £18,400 in England”.

With the UK government now passing a directive whereby foreign workers will have to earn a minimum of £25,000 per annum to be allowed to remain in the UK, this will cause even more significant staffing problems for the health care sector.

The BBC further reports on the directive:

“Danny Mortimer, co-convenor of the Cavendish Coalition and chief executive of NHS Employers, said: “If adult social care wasn’t in a precarious position before coronavirus, it certainly is now.” He said one in five health and care workers have said that they are likely to leave their roles after the pandemic, adding that was “pretty worrying” given that the sector had 122,000 vacancies in England alone.”

According to the Home Office, “The EU Settlement Scheme means that all EU and EAA citizens, and their family members, currently working in social care can stay in the UK and we are encouraging them to do so.”

As far as migration to the UK from a worldwide as opposed to purely EU perspective, the UK government is now free to pursue a migration policy which is very similar to that of Australia, whereby applications for permanent residency in the UK will be based on a points system, with a particularly substantial weighting placed on the nature of intended employment.

Leaving the EU does not mean that the UK can no longer trade with other EU countries. This is, in fact, of greater benefit to the EU than the UK as in 2017, for example, the UK ran a trade deficit with the EU. 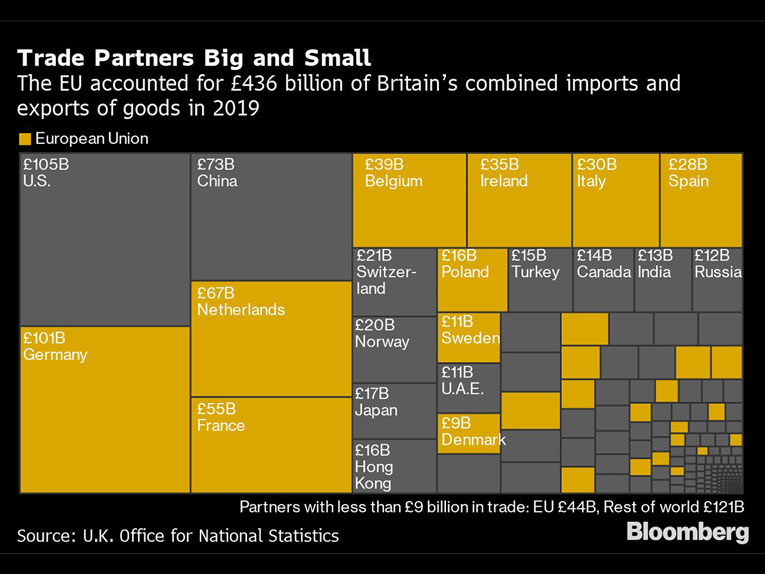 The UK imported more goods from other EU countries than it exported to them. According to the Office of National Statistics, UK exports that year totalled €274 billion, while imports from the rest of the EU into the UK totalled €341 billion.

Currently, 26 European states have a trade surplus where the UK is concerned, so when it comes to renegotiating trade deals, the UK certainly has the upper hand.

Beyond that, the UK is now free to renegotiate trade deals with other major countries, such as China and the USA, without any restrictions being placed by the EU.

Perhaps one of the biggest disappointments of joining the EU back in January 1973 was what appeared to be a misleading of the government at that time, led by the late Sir Edward Heath.

Two years earlier, Heath published a white paper in which he stated that there would be: “no erosion of essential national sovereignty.” Ultimately, this was not to be the case.

Even before the UK joined the EU, it passed the European Communities Act in 1972, which, ultimately, meant the UK had to accept the supremacy of European law.

Over time, with more and more power being acceded to Brussels, the European Court of Justice became responsible for delivering a number off hammer blows to the UK government

According to the business leader Nicholas Wallwork, “A key argument of Eurosceptics was that the British public never voted to join a federal Europe, where the EU would dictate the UK’s laws. Nor did they agree to the European Parliament having the final say on policies passed by the UK Parliament. The UK joined an economic union, not a social and political union. If the people voting in the 1975 referendum had known they were ultimately voting to stay in a federal Europe, would the result have been different? Quite possibly.”

In leaving the EU, the UK will now have a far greater say in the legal aspects of the country and will no longer have to comply with all EU legal directives.

However, that does not mean that having left the EU, the UK is now exempt from all EU legislation. It is not, as many of the laws are still applicable, irrespective of whether or not the UK is a member of the EU.

At this moment of uncertainty, our solicitors can provide practical insight into what this means for you, your family or your business.

Get in touch now to get legal advice in the face of this uncertainty and plan cautiously for the future!